Using Artificial Intelligence in music production is an exciting and strange idea.  Different AI tools have come and gone since 2016, but this is the first one that caught a deeper interest. When it comes down to it the output still seems random. Today that has changed. Magenta is a suite of Max for Live Devices that gives musicians easy access to experimenting with AI for generating new ideas.

Magenta released a free Max For Live Patch to give you access to the power of Magenta Studio. It has four devices you can use to make new musical ideas. This video is a walkthrough of Magenta by Google:

Magenta is an open source research project by Google. It was made to exploring the role of machine learning as a tool in the creative process. Magenta has taken massive amounts of data and created a database that can then be used with machine learning.  A great example of this is Generate.

The Generate module using AI and Machine Learning to make brand new ideas. Here is Google’s explanation of how it works:

Generate uses a Variational Autoencoder (VAE) that has been trained on millions of melodies and rhythms to learn a summarized representation of musical qualities. Generate chooses a random combination of these summarized qualities, and decodes it back to MIDI to produce a new musical clip.

So, in other words, they have given Magenta a massive collection of MIDI they have collected from live performances and music. The AI then sees similarities and tries to make a new melody that would be similar yet different from the originals. 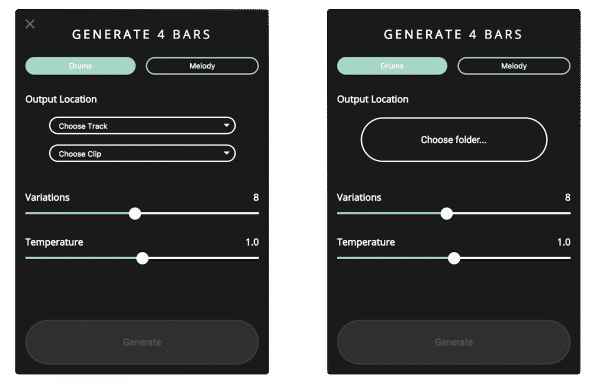 Artificial Intelligence as a New Toolset

Machine Learning is really good at average. Right now we are pumping a massive amount of info into programs to have them spit out things that are similar. That means it is taking the average of data and trying to make something. It also means these tools have yet to make something spectacularly new and unexpected. It can’t come up with the next best idea, right now it can just average out past ideas.

What this means as a music producer is we shouldn’t rely on these tools. But they are a great way to come up with unexpected ideas. After you get a bunch of ideas you can use your own tastes and decision making to narrow it down or edit them into new ideas.

Interpolate is particularly useful. I was able to take 2 melodies I wrote and use it to move between the two and come up with some new ideas. Taking the generated MIDI from Magenta, I edited it and made a whole new track.  It’s a really unique way to augment your writing process.

I don’t know what the future holds for Machine Learning and Music Production, but this is the first step I have seen that really excites me as a musician.

Check out Magenta Studio and download to start playing: https://magenta.tensorflow.org/studio/ableton-live 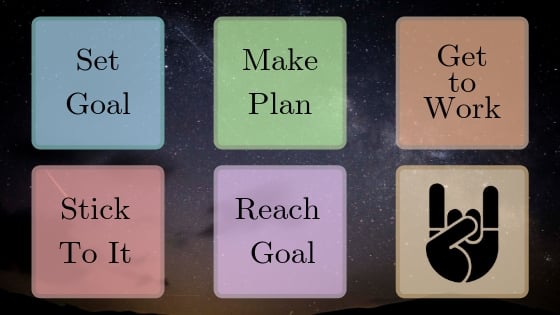 New Years is the perfect time to evaluate your strengths and weakness and make a plan to make it to the next level.  It’s a great opportunity to make impactful goals that will lead us to success.  You will never make it as a musician if you don’t have solid goals.

How will you reach your musical goals this year?

When you first think about goal setting, the idea of just writing out some statement and posting it on your wall comes to mind. That is why so many people fail at there goals.  There is a science… no, an art to writing great goals.

Good goals make you feel good, great goals propel you to your achievement.

To start make sure any goal is SMART which is; Specific, Measurable, Achievable, Realistic, and Timely.  Here is a breakdown of what makes a great goal.

Once you got your SMART goal you are all set to succeed. Right? Well, there are a few other things that increase your chance for success.

Following Through With Your Goals

There are a few proven things to help you accomplish your goals.  Research has shown us that having accountability partners as a huge motivating force.  Having a weekly check-in with someone massively increases your likelihood of doing it.  You’re not just letting yourself down, but you’re letting someone else down.

You also want to add Forming Habits.  You can’t just add a goal, you need it to be habitual. There are three R’s to habits; routine, reward, and reminder. When you have the trifecta of these forces, you are guaranteeing your goal to become a habit.

To help reinforce your goals, I put together an 8-week email course on goal setting. It is free for those interested in getting a routine of working on their goals.  Seriously… I don’t want people to just join this course and not do anything. It takes me time and money to send these things out. If you join, commit to your future music and achieving your goals.

Having access to great sounds makes the whole music making the process so much faster.  That is why I am always on a hunt for good Live Packs. I’ve collected my top favorite free Live Packs and Instrument Racks. Download each of these for free. If it opens up a Gumroad page, just put “0” in the name your price to grab it for free.

Singularities for that synthy goodness

First on our list is an official Live Pack from Ableton, Singularities.  This Live pack is freaking amazing.  As they say on the website;

Singularities makes use of single samples and finely tuned, expressive parameters to capture the sound and feel of classic synths and samplers. Included are 40 Instrument Racks, plus MIDI clips and drum kits – all the parts you need for a complete track.

I love the collection of synths and instrument racks in this Live Pack. Check out the sounds of Singularities below.

Smashed Snapple Can Just For Fun

If you have read this blog, you know I am a fan of AfroDjMac. He is constantly coming out with Live Packs and Instrument Racks. I didn’t want to litter the list with all his releases, but this is one of his highlights.

The Smashed Snapple Can Live Rack is just that… A smashed can. AfroDjMac showed this instrument off at Loop this year. Here is what he said about the instrument rack:

I created these while monitoring the In-School Suspension room at the high school where I work. A bored and belligerent student was amusing himself by causing a disruption. He was blowing into a crushed Snapple to make some kind of dying animal sound. Here is the sample:

Unaware of who was supervising the room, the student was a bit surprised when I asked him to do it again so I could record it. After recording it, I processed the sound in Ableton Live and made the three instruments I am sharing with you today.

I love the context this gives to the samples. Freaking hilarious.  Download the Live Pack Here.

END_OF_DOCUMENT_TOKEN_TO_BE_REPLACED

Sometimes a track just spills out of you and other times it is an epic battle equaled to the fight on the mountains of Mordor.  Through the years I have figured out some techniques to get me out of those ruts. Once and a while you just need a  little creative nudge to finish that idea or come up with a new one. 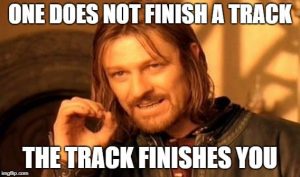 One technique that has helped me a lot, I call the title question. The idea is you start with a title and start exploring questions and answers that it envokes. I know… seems cheesy. Well, it is but it works.

1. Start with the track title.  Usually, when I start a track the title is the last thing on my mind. I usually don’t even have the name until I send it out for mastering. But when I am lost on ideas to get a track started, this technique is a lifesaver. One of the best ways to come up with an idea is to start with an action. Like running, fighting, breaking, and so on. Then add something else to give it context, and you have an evocative name.

2. Start to question the title.  Now that you have a title, start asking yourself what it might mean. Make a list of questions you might ask to unlock the meaning of the title. Things like: When did this happen? Who was there? How does it make me feel? What will happen next? Try to get at least 3 questions, but 4-5 is better.

END_OF_DOCUMENT_TOKEN_TO_BE_REPLACED

Developing a song is more than just the pieces placed together. It’s about creating a fluid story. In this article, I am going to go over how to arrange your track and getting a solid song structure for your music.

The Building Blocks of an Arrangement:

To start, let’s go over the parts that make up an arrangement. There are many different terms, depending on the style of music. For our purposes, we will be looking at these basic terms and then applying them to the electronic music arrangement:

END_OF_DOCUMENT_TOKEN_TO_BE_REPLACED

Goals are a funny thing. We love improving ourselves and finding the next best ever, but sometimes we get stuck. You might ask yourself:

Why do I never finish my goals?

How can I stop from getting stuck in a rut?

Where do I even start?

I get it, we all get these thoughts sometimes. Luckily, there has been lots of research on goal setting and achieving them.  These three things are major factors:

Being Accountable to Others

That is why I put together a free email course on Goal Hacking. I will be sharing a whole system of setting great goals and achieving them. If you join I will send you an email once a week, for 8-weeks, with activities and techniques.

I don’t want to give too much away, but let me say that I am really proud of what I have created to help people set their goals for the new year. It has worksheets I have created, interactivity with other creatives, and more.

Ok… I need to stop before too many spoilers. If you are down and want to dedicate to your future, join me and an amazing community of artist.