OK… this is going to be heady.

I tell musicians this all the time. Mastering is not music. Mastering is more of a technical science then it is a musical expression. Yes, there is an art to it, but you have to understand a lot of basics on how we perceive sound and different loudness standards.  If you want to be a musician, you might skip this and get a mastering engineer. (Shameful plug… I do Mastering) If you are interested in learning the art of mastering, continue on my brave friends.

Back in the wild days of the internet (Are they done? Bitcoin anyone?), many streaming services arose. At the same time, there were loudness wars ramping up on Tv and video streaming. Along the way, we had a massive range of loudness per platform. If you had your headphones in and listened to a song on iTunes, and then flipped to Youtube you might hear a huge difference. Or worse, TV and commercials. So… some really smart people made a standard of tracking loudness. There are two main ones LUFS and LKFS.  Now… I know some nerd out there will give me a talking to, but LUFS and LKFS are in practice the same thing.

(Read more on the Loudness War with this Guest Article)

This standard helped make volumes of songs or video be pretty close to each other. It has helped a lot in ending the loudness wars. But… The different streaming services have different loudness standards and algorithms to take measurements and apply the normalization.  When mastering our songs we want to keep the LUFS range to about the final range by that particular streaming service. Otherwise, if we go over then the service might lower the volume to get the LUFS they have decided to keep as a standard.

Below is a graph of the different streaming services and the LUFS standard they use. 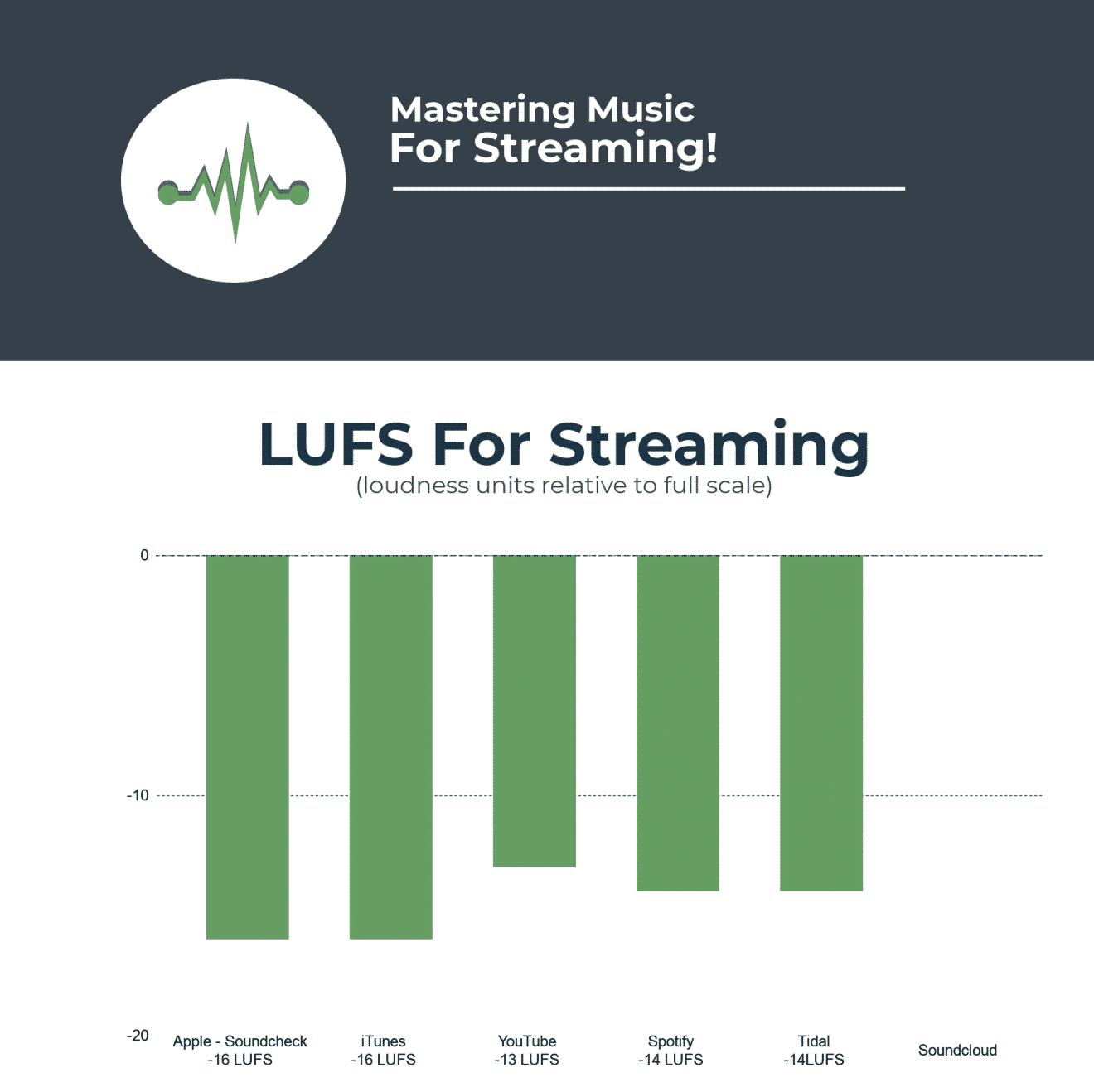 Note: There isn’t anything on Soundcloud? That is because as of now (Jan. 2018) there is no loudness standard for Soundcloud. That means the loudness wars are alive and well there.

WHAT DOES THIS MEAN TO ME?

I also like to remind engineers of the art of mastering as well.  The rule of thumb has been the same since the 90s, make it as loud as possible as long as it still sounds good. You want to make it loud, but not distort the sound.

Having said this, it makes sense to know the LUFS standard of the platform you are releasing on. There is no reason to push the sound louder and degrade the sound further if the platform you are releasing on is going to lower it anyways, resulting in the same volume and worse quality. You want to balance the art of making it sound good with the science of the standard of each platform.

KNOWING IS HALF THE BATTLE

There you go… Keep this in mind the next time you are mastering tracks and wonder what LUFS to set the track at.  If you’re interested in learning more about mastering, I teach 1-on-1 classes and we can dive into the subject. Or if you just looking for a mastering / mixing engineer, hit me up.